As mentioned, part of the technical losses can be attributed to electrical equipment in the transmission and distribution network—this includes transformers. Transformers’ role in losses accounts for about a third of the total energy lost in the transmission and distribution system, [4] which opens up a big opportunity to increase energy efficiency and, ultimately, cost savings. There are two types of losses generated by a transformer when in operation: No Load Loss, and Load Loss. No Load Loss (NLL) is the constant loss regardless of the transformer’s load, while Load Loss (LL) on the other hand is the loss caused by the flow of current when the transformer is loaded. But in what way can transformers be designed to improve these losses? There are a couple of ways to answer this. For lower Load Loss, it can be addressed by reducing the resistance of the conductor via larger cross-sectional area. For No Load Loss reduction, the choice and size of the core material is key. [5] Common core materials are either Silicon steel, or Amorphous steel.

The two materials differ in their atomic structure, saturation flux density, thickness, and electrical resistance, but this article won’t dive too deep into the technicality of their properties. Silicon steel used in transformer core applications has a crystalline atomic structure with greater thickness and higher loss versus that of Amorphous steel.

Amorphous materials were developed in 1975 by Allied Signal by using a planar-flow casting method for the production of amorphous alloy ribbons in continuous lengths. Then the molten alloy is cooled at a rapid rate of 1,000,000°C per second. [6] Unlike Silicon steel, Amorphous steel has a non-crystalline atomic structure. It is thinner and has lower loss and exciting current compared to Silicon steel.[7]

With these differences in properties, amorphous steel cores have been identified to be more energy efficient than its silicon steel counterpart, mainly driven by its better No Load Loss. Reductions in No Load Loss can go as high as 70 to 80 percent. [5] 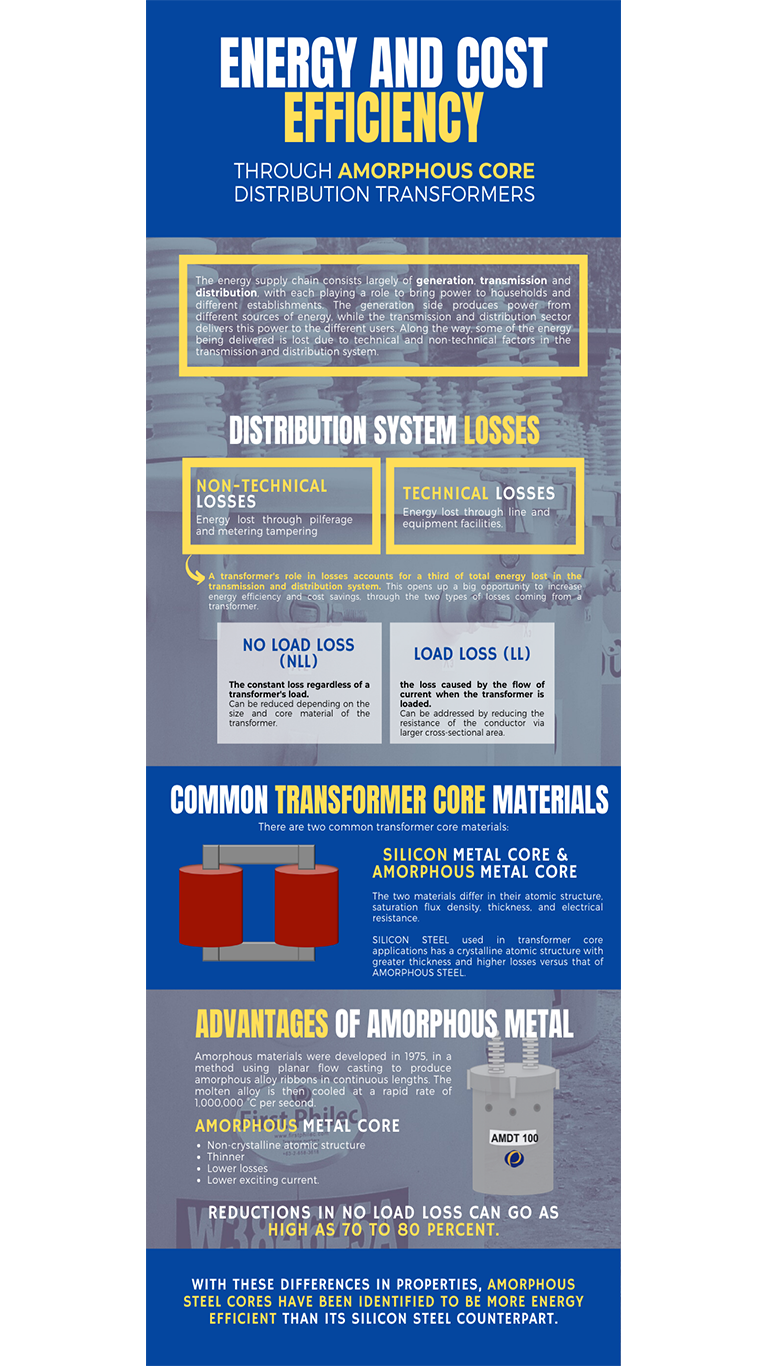 A transformer life expectancy is around 20 years, or more. Thus, it is uneconomical to buy a unit based on its initial purchase price or bid price. Initial cost is important, but it is equally important to take into consideration the cost to operate and maintain the transformer over its useful life. The best method to go about this is to base the purchase decision on the Total Owning Cost (TOC) of a transformer, which calculates the real economic cost of the transformer throughout its life span. A sample computation can be seen below for a 50 kVA Transformer. [8]

Because the amount of energy lost is lower in the amorphous core transformers, this increases the energy savings in the system and reduces the environmental burden. Studies have shown that on average, electricity distribution losses in the APEC region can be reduced by 19% in 2030. As a result of this, annual CO2 emissions would be reduced by 17 million tons in 2030. For the Philippines, a scenario was simulated by installing amorphous transformers in the distribution network and the results of this were 4.5 terawatt hour cumulative electricity savings, and 2.15 million tons’ cumulative emissions reduction between 2016 and 2030. [1] 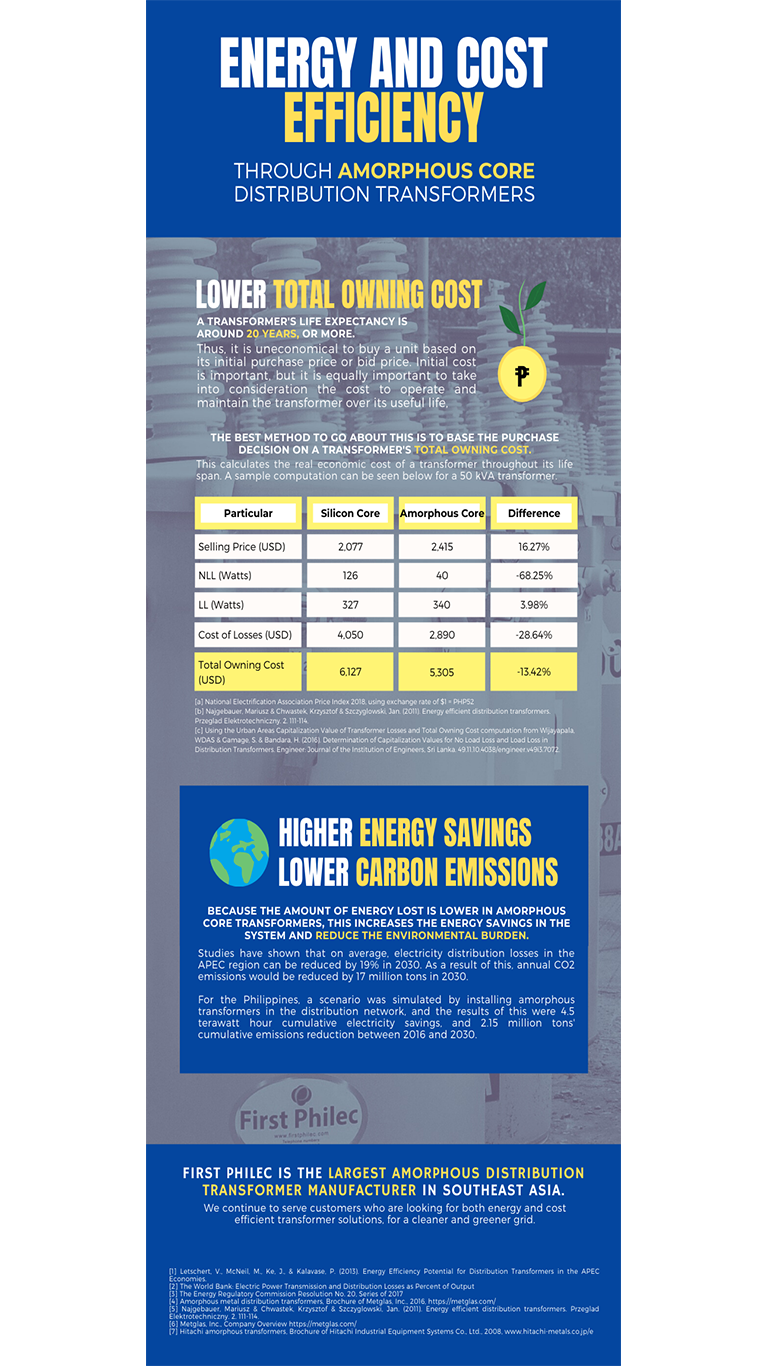 It is clear that there is a greater need for a more efficient use of materials and equipment of the grid, such as distribution transformers, to take into account environmental concerns. Amorphous alloys can significantly reduce the losses that occur in transformers in comparison with Silicon steel due to superior magnetic characteristics, which contribute greatly to energy conservation and reducing carbon dioxide emissions.

[2] The World Bank: Electric Power Transmission and Distribution Losses as Percent of Output

[3] The Energy Regulatory Commission Resolution No. 20, Series of 2017